Happy holidays! Rob and I are back in Brooklyn after spending a wonderful Christmas in Maine with my family. We cooked, we tromped through the snow, we opened way too many presents, and Rob and I caught up on sleep thanks to two exceptional grandparents and one loving auntie.

As we zoom toward 2018, I haven’t had a chance to process the longest shortest year that was 2017. But I can offer you a “best of” from the last two, jam-packed weeks. 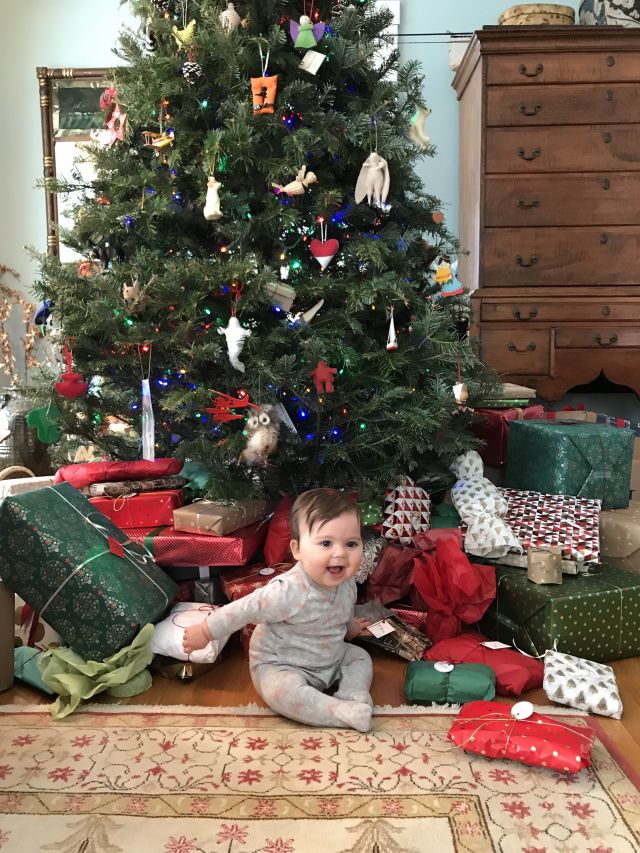 Road-tripping: Instead of going straight to Maine, we took a brief art detour. We drove up to Great Barrington, picked up some last-minute gifts at Rubiner’s cheese wonderland and had a wonderful dinner at Prairie Whale, which is owned by former Marlow & Sons and Diner partner Mark Firth. We stayed at The Briarcliff Motel, a stylishly updated roadside motel that was affordable and extremely pleasant. The next morning, we had life-changing griddled egg, ham, and cheese sandwiches at Rubi’s Cafe, then scooted over to The Clark in Williamstown. After an hour wandering through the blissfully empty museum—gobs of Impressionist masterpieces to ourselves—we went on to Mass MoCA to visit the always impressive three-story Sol LeWitt installation and to see the sprawling 2017 expansion, including the the trippy-amazing James Turrell exhibit.

Baking: I bought my sister, Annie, Dorie Greenspan’s new Short Stack cookbook about butter, which inspired me to make her famous World Peace Cookies (so-named because a friend told her if everyone tried them, we’d have world peace). A kind of shortbread chocolate chip cookie hybrid, they’re exceptional, especially finished with flaky salt. Our other holiday baking win: Rob’s intensely rich chocolate caramel tart, which we’ll be making again for New Year’s Eve.

New traditions: We always have a decadent Christmas dinner but then there’s the question of what to do on Christmas Eve. This year, Annie introduced what we’ve decided is a new family tradition: grilled oysters. She borrowed the idea from her friend, chef Pierce Boalt-Juckett, who serves them at backyard parties year-round. They’re simple*, impressive, and crazy delicious. Here’s how:

Scrub oysters clean. Set up a station by the grill: towel and shucking knife; bowl of cubed, chilled butter; bowl of sliced scallions; hot sauce. Fire up the grill and place the oysters on the grill, cup side down. The oysters will naturally start to crack; once they do, place them on the towel and use the knife to gently pry them open. Don’t forget to separate the meat from the shell. Once you have them all open, add a cube of butter, a pinch of scallions, and a dash of hot sauce. Grill until butter is melted, about 5-8 minutes including shucking time.

*If you don’t know how to shuck oysters (I don’t), bribe a skilled friend or family member into helping you.

Playing with food, part 1: We started giving Lilly tastes of food at four months but she’s only just gotten into eating. It’s super fun, but also raises plenty of new questions and needs. I’ve been leaning on the founders of Raised Real, a homemade baby food company I advise, for help—this blog post by cofounder Michelle Davenport, who has a phD in nutrition, is a helpful primer on introducing solids.

I’m obviously biased but I love what Raised Real is doing and we’ll be incorporating their meals into Lilly’s lineup (they’re also great grown-up food—I frequently steal them for quick lunches or smoothies). If you want to check it out, they’re launching nationwide in Jan and you can use code Mollie25 for $25 offand a free meal maker.

Playing with food, part 2: In addition to baby-friendly purees, we’ve been giving Lilly plenty of regular food to try, from nubs of sourdough miche to chicken drumsticks (both of which she *loved* gnawing on). And this morning, I made a batch of banana-egg pancakes that Lilly happily gummed her way through. (I also love them for breakfast—add a couple tablespoons of buckwheat or almond flour to bulk them up.)

Gift MVPs: My mom loves presents more than anyone I know. She spends months collecting gifts, from Maldon salt and parchment paper to vintage tableware finds and carefully chosen books, and countless hours wrapping them. By the time she’s done, the pile of gifts spills out three feet from the tree. It’s totally insane and one of the most lovable things about her.

A few favorites: this handy silicone bib that keeps Lilly mostly clean during her eating adventures; the Zahav cookbook, which has a whole section devoted to tehina and hummus (he’s obsessed with Soom, too); and this Everlane sweater in my favorite cropped shape and a fun waffle knit. Oh! And these amazing baby socks, which are thick and warm and don’t slip off.

Bonnie requested book ideas for 2018. l almost always read fiction but Rob has been so nerdily effusive about his John Adams biography that I had to read a few chapters for myself—and now I see what he means. It’s meaty but not dense, and uses original letters and papers to bring the historical events to life; I’m especially impressed by Abigail Adams, who was an exceptional writer and observer of the turbulent early years of our country. I’m planning on tackling it after I finish Nicole Krauss’ philosophical-lyrical Forest Dark. And even though it’s nominally a cookbook, Salt Fat Acid Heat, by Samin Nosrat, is one of the most fun and inspiring books I’ve read recently—she explains cooking fundamentals in a way that will make you dorkily excited to get in the kitchen.

Whoa, the next time we talk it’ll be 2018! I have some ideas for kicking off the new year right (no resolutions, promise) and would love to hear how you’re getting into the right mindset.

P.S. If you’re new, welcome! You can find past newsletters here.