Well February just disappeared, didn’t it? As I close out this funny short month, I’m trying to tamp down my anxiety about not having a new life plan yet. I’m not alone; I have been talking to a lot of people who are in transition—leaving jobs, starting things, negotiating next life stages. As exciting change can be, it’s also easy to feel lost or unmoored—I know I do. It’s also very easy to assume that everyone else has their stuff figured out when in fact, we’re all just exploring and testing and finding our way.

There are a couple simple frameworks that have helped me give structure to my thoughts during times like this. One is using a Venn diagram to think through what you’re good at, what you want to do, what people will pay you to do, and what the world needs. I heard about it from Hayleybut have also seen it described as ikigai. The second framework is simple: Think about all the things you’re doing and divide them into energy giving and energy sucking. Noodle on why some things are energizing while others are depleting, and try to weight your days toward the former. I stole that one from my friend Emily (more on her later).

So there’s your homework if you’re feeling a little up in the air. Here’s what else I’m doing: 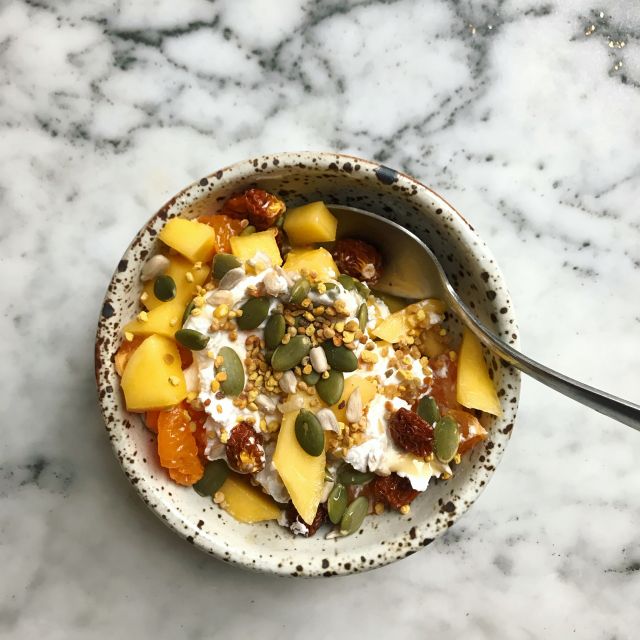 Doubling down on documentaries: Rob and I just watched Icarus, the Netflix documentary about the Russian doping scandal and it was *mind-blowing.* I remember reading the New York Times story but didn’t realize at the time just how insane it all was—we kept pausing it to say, “Did that really happen?” Thanks to Fredrik for telling us about it! On the complete other side of the documentary spectrum, we’re halfway through Give Me Future, which follows Major Lazer and his team through the process of planning and throwing Cuba’s first major concert in 50 years. It’s worth watching for the crowd shots alone—over 400,000 people turned out—not to mention the incredible performances.

Becoming a t-shirt person: I have never felt particularly cute in t-shirts but I got a preview of these Ayr tees a couple weeks ago and fell in L-O-V-E. They’re slightly boxy and loose so you can tuck them in, and have short, arm-flattering sleeves. Buying in white and black and patiently awaiting the navy version.

Optimizing bottle sterilization: After I posted a pic of baby bottles in boiling water on my IG stories, I got a mountain of sympathetic DMs—thank you for all the moral support! While it’s not as bad as it seemed (I stopped sterilizing bottles daily after the first few months and now just periodically boil to get rid of residue), I wanted to share a couple tips: Medela’s microwave steam bags work in two minutes and are great for travel; Medela breastmilk soap cuts through greasy residue; and the Philip electric sterilizer takes up counter space but is a nice alternative to microwaving.

Dabbling in coconut yogurt: One of my many weird habits is spending way too much time in the yogurt section of any grocery store. I have my go-to’s—Siggi’s full-fat for everyday eating and cooking; White Moustache for a spendy treat; and Bellwether Farms sheep milk when my tummy is bothering me because I find it easier to digest—but always like testing new options. I just tried Chobani’s new A hint of flavor line, which is relatively low in sugar and comes in chic flavors like Monterey Strawberry and Alphonso Mango. And for a non-dairy option, I really like Coyo Coconut Yogurt, which is super thick and has a nice tang to it. It’s too rich to eat a whole bowl so I use it more as a topping for fruit and nuts, or dolloped on top of overnight oats.

Speed reading: I just finished Celeste Ng’s Little Fires Everywhere (loved, highly recommend) and was in need of a good read. A friend recommended Naomi Alderman’s The Power, a zippy science fiction novel that imagines what would happen if women had the ability to send electrical jolts through their fingers, and by extension to dominate men. It’s entertaining and escapist, and a nice antidote to the news.

Starting fizzy water wars: Guys, I’m just not into La Croix. I’ve tried, and I really respect whoever is in charge of their brand marketing, but I just don’t think it’s good. I do love Spindrift, which I discovered when I was pregnant and so sick of plain water; their sparkling waters have the tiniest bit of real fruit in them, which adds refreshing flavor without sugar. They can be hard to find but I get them at Target and also at Dig Inn.

Feeling grateful: This weekend, Frank Bruni wrote a sad, thoughtful, and ultimately hopeful piece about losing sight in one eye. It made me think about the things we take for granted when we make plans (having a kid is also good for this, in a much lighter way). It’s a beautifully written reminder that, despite all the uncertainty and everyday stresses, things are pretty extraordinary.

​Bonus! Emily Says: The other night, my friends and I got into a deep discussion about what we keep in our freezers at all times (yeah, we’re way cool). Emily, the food and Internet genius who launched and grew BuzzFeed Food and Life, and who also started an amazing kitchen organization company called KitchenFly, had a very strong POV. Here’s her list:

-Sliced whole wheat bread
-Frozen peas or spinach
-Edamame and sweet potato fries (recent additions, idea via Jenny Rosenstrach who I love, love)
-A big batch of soup/stew (usually minestrone, in both quart and pint containers depending on if I’m making it for me and John or just me) [Mollie note: Smart! We also freeze soup and stock in ziplocks for quick defrosting]
-Chicken stock (in both quart and pint containers, and if I’m really on top of it, as cubes from an ice tray for a quick addition to pasta sauces)
-Bacon
-Smoothie packs (pre-measured/prepped ingredients for a smoothie) [Mollie note: She gave us these after Lilly was born and they were life savers]
-Shrimp
​-Frozen strawberries for when I don’t have smoothie packs
-Ice cream, ice cream sandwiches, popsicles [Mollie note: Need to remember to buy ice cream sandwiches for quick sweet fixes]
-A disc or two of pie dough—always turns out flakier/better than freshly made dough!
​-A pint of hot fudge that I buy from Van Leeuwen even though they technically don’t sell it; I defrost in batches if I have a dinner party for my signature ice cream + Tate’s cookies + hot fudge in mug
​-Usually a thing of store-bought cookie dough

Impressive! In case you’re curious, in our house we try to have homemade stock, beans frozen in their cooking liquid, some sort of healthy soup, sliced She Wolf bakery bread, and dark chocolate disks at all times. And every time we make things like meatballs or veggie burgers, we always stash extras in the freezer; most recently we made Ottolenghi’s turkey zucchini meatballs, which are healthy and tasty and a nice break from wintery foods. (Don’t worry if you don’t have all the spices; you can swap or skip things and they’ll still be great.)

And that’s it—hugs and see you next week!

P.S. Old editions live here!
P.P.S. Pregnant? You might be interested in my non-exhaustive pregnancy thoughts and guide to baby stuff.