It was Rob’s birthday this past weekend and we’re still recovering from the festivities. My parents swooped in to take care of Lilly so we could spend a night on the North Fork. We stayed at Sound View, a gorgeously renovated motel right on the water, and did our best to cram in as much eating and drinking as possible (more on that below). While we were away for less than 36 hours, our mini break was restorative and made me extra excited about weekend trips later this spring and summer.

Here are some Long Island faves and other fun things: 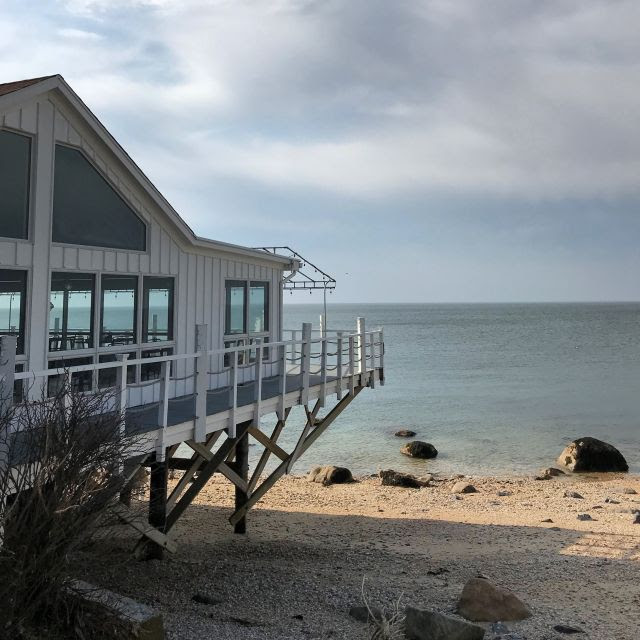 Mini-breaking: If you’re thinking about a trip to the North Fork, the Sound View has an unbeatable spot right on the water. But be warned: It’s a true roadside motel, which means you go to sleep and wake up to the sound of cars zooming past. I also suspect it gets pretty busy on the weekends, so would stick to a Thursday or Friday reservation so you can be sure to get prime window seats in the lounge and restaurant.

Beelining for oysters: When we arrived in Greenport, we went straight to Little Creek Oyster Farm, a small wooden shack right on the harbor. They had a wall of tinned fishes, drawers of handsome oyster tools, and ice-cold Muscadet—what more do you need? We went through a dozen oysters (including all-time favorites John’s River from Maine), some North Fork potato chips, and were in absolute heaven.

Biking for breakfast: Way before we were dating, Rob and I would go on long bike rides (50-80 miles!) along the Hudson and through other parts of NJ and NY. He would map out a great journey; I’d make sure we had good snacks along the way. This weekend, we returned to our old ways and took our road bikes for a 25-mile loop from Greenport to Orient Point, ending with a huge breakfast at the recently updated (and extremely delicious) Bruce & Son.

Building a better veggie sandwich: On our way out of town, we stopped at the North Fork Table & Inn, a North Fork institution that also has an amazing food truck. I got their seasonal vegetable sandwich (thanks for the tip, Miranda!) which tasted like spring: green chickpea hummus, fat pile of arugula, pickled onions, and—this was genius—crispy fried onions. I’ll obviously be trying to recreate it as soon as I locate some green chickpeas—or even better, spring peas?

Supporting farmers (and fisherpeople): We just signed up for our third year of the Cobble Hill CSA, which starts in June and runs through November. We get vegetable, fruit, and flower shares, and split it with our friends Emily and John, which helps it from getting overwhelming. If you have one in your area, it’s a great way to make sure you’re eating locally and seasonally and can push you to expand your cooking repertoire. We also just found out about Mermaid’s Garden’s fish share, which runs on a four-week cycle and provides all Long Island and New England fish. We’ll be trying it later this spring!

Travel prepping: We’re going to Italy with Lilly and my parents next month, and we’re all preparing in our own way: Rob’s stocking up on maps; my mom bought new paints; and my dad has been researching the best baby travel toys. He bought Lilly this genius cube, which is a teething toy and educational tool in one, but a little bulky for plane travel. Better for in-air: Manhattan Toy’s classic Skwish design, which can be smooshed into any bag and doesn’t make noise, and of course a couple of Indestructibles books.

Finding joy: I just had a fun coffee with Ingrid Fetell Lee, who was just back from giving a TED talk. She is the founder of The Aesthetics of Joy, which explores the connection between design and joy, and how to create more of the latter through simple environmental changes (hint: plants! color!). While her TED talk isn’t online yet, you can pre-order her book, Joyful, and follow @aestheticsofjoy for a daily dose of happy.

And finally, two reads you might like. First: Tim Urban’s Wait But Why post about picking a career. As with most of his posts, it’s very, very long so you’ll want to set aside some time to get through it. But it’s full of fun cartoons and useful frameworks, and some that combine the two, like the Yearning Octopus. As someone who has been thinking a lot about transitions, career growth, and next steps, I identified with much of it, especially the idea that our careers aren’t tunnels; they’re a series of dots that add up to a path. And there’s a helpful list of resources and tools at the end.

Second: I just started The Mothers on recommendation of my friend (and new mother) Eimear and it’s heavy but gorgeously written and very hard to put down.

Have a great week!