I hope you’re having a great weekend. It’s crazy to think it’s already June, and extra crazy for us because Lilly is about to turn one year—!!! It really has been the longest shortest time. We’re throwing her a little party next weekend and since she can’t talk yet, we went ahead with an Italian aperitivo hour theme. This year, spritzes and cake; next year, she can have a Frozen-meets-Moana-meets-Elmo extravaganza.

Other than that, things have been both exciting and overwhelming trying to balance work and life. I’m definitely still figuring it out, and have even more respect for all the parents I’ve worked with over the years. It.is.no.joke.Here’s what’s going on in my world, besides not sleeping nearly enough: 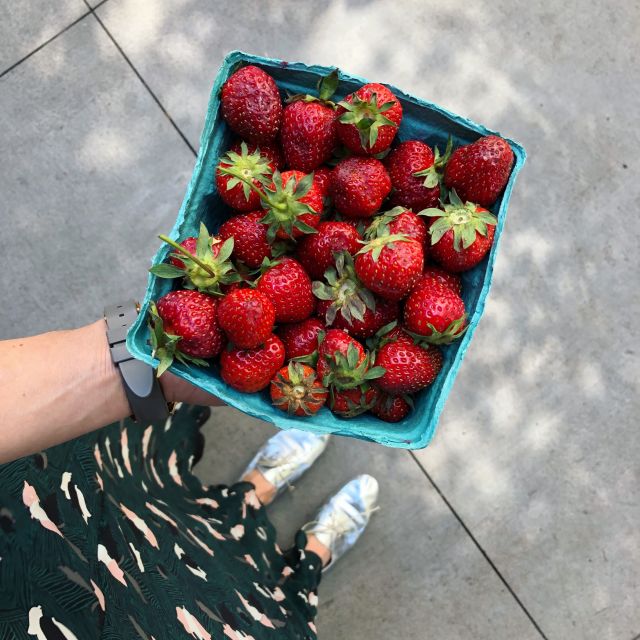 So much caffeine: Lilly is up and ready to party before six most mornings, which means I’ve needed more coffee than usual. Instead of mainlining New Orleans iced coffees from the Blue Bottle near my office, I have a new plan: caffeine-laced smoothies. I blend frozen banana, a spoonful of peanut butter, a splash of cold brew, some almond or oat milk, and spinach together—tastes like a coffee smoothie and is great for breakfast or a snack. This is a good basic recipe; just swap spinach for kale and add coffee to taste.

Long reads: I recently finished An American Marriage and loved it. Next on my list is Pachinko, which begins in Korea in the early 1900’s and follows a family over four generations. I’m about 50 pages in and hooked but I know I won’t have much time to read until we’re in Maine for the Fourth of July. I’m also on the hunt for a good beach read—any tips?

Short reads: I’ve been a fan of Chimamanda Ngozi Adichie’s writing for years but didn’t know much about her until this recent New Yorker profile. It’s a fascinating look at her relationship with America and Africa, and the way she’s negotiated both over the years—it also made me want to reread all her books immediately. On a different note, I loved this NYT interview with StitchFix founder/CEO Katrina Lake—I’m so impressed with what she’s built and appreciate her candid advice.

Backyard prep: Now that it’s warm out, we’re trying to make our outdoor area as kid-friendly as possible so Lilly and her buddies can cavort around while the grown-ups have wine and snacks. When I was a kid, my sister and I would play in a giant bucket filled with water, but we’re going slightly more official with this cute kiddie pool (which also comes in donut and hamburger options). I also just ordered this Little Unicorn blanket, which is spill-proof and comes with a carrying handle—great for creating a play area in any outdoor space.

Seasonal favorites: Ramps get a lot of play but the seasonal produce I go truly bonkers for are fresh peas (favas, shelling peas, snap peas) and strawberries. They’re not the same any other time of year. If you see them at the farmers’ market, buy as many as you can and make these:

New BBC obsession: I really appreciate the British approach of creating mini seasons of 7-8 episodes because it makes it less intimidating to get into a new show. You should definitely watch Luther and Sherlock if you haven’t yet, and now I’m hooked on Killing Eve, which stars Sandra Oh as a charmingly unpolished MI-6 agent chasing a cunning female assassin. So good.

Finally: NYC Summer Stuff! When I first moved to New York, and had more energy than dollars, I used to send out a weekly email called, “A Five Point Guide to a Better Summer.” It was a roundup of fun, mostly free things to do in New York. I had to phase it out when life got busier, but some of my favorite things are still relevant:

And if you want more ideas, New York has a newsletter devoted to all things summer. You can trust them—they know things.